Ensure your team is in formation. 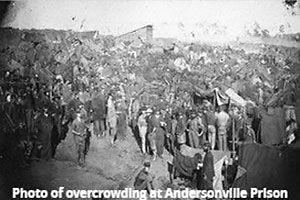 There is plenty of blame to go around. The Union stopped exchanging prisoners in March 1864 when General Ulysses S. Grant brought an end to exchanges. Andersonville was constructed to hold 10,000 Union Army prisoners. During Andersonville’s short 14 months of operation, 45,000 soldiers from the north were incarcerated there, and nearly 13,000 prisoners died from disease, poor sanitation, malnutrition, overcrowding, or exposure.

Before we toured the prison site, we visited the town’s small Civil War Museum with weapons, maps, and other authentic memorabilia. One of wonderful uniforms was worn by the drummer boy mannequin. I’d never known that much about the role of drummer boys. The boy’s average age was 11 years-old, some were as young as eight. I had no idea how important they were! They bugled Taps and Reveille. The constant “rat-tat-tat-tat-tat” snare drum rhythm kept the troops marching in cadence, signaled forward advances, quick time, attacks, retreats, and other troop maneuvers. Drummer boys were essential for seamless officer-to-troop communication.

I’ve surveyed the top management teams of hundreds of organizations. I begin by asking two questions: #1. What are the strengths of your management team? Now let’s look at the other side of the coin: #2. What is your team’s biggest room for improvement? Eighty percent of the answers to the question, “Where do we need improvement?” are predictably communication. 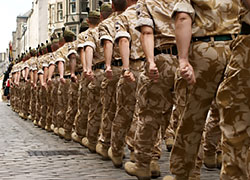 What do you think the top managers in your organization would say is your greatest opportunity improving teamwork? How are you signaling to ensure everyone keeps in cadence, knows where you are going, your forward advances, and their part in the battle for quality, market share, and profits? When changes are being made in one division that affect other departments’ performance, how do you ensure those departments know how to keep in step and up to pace?

Why not ask everyone in your organization, “How can we improve our communication?” If your people think you mean it, and that you won’t shoot the messenger, you may be amazed at the answers you receive. Learning how to solve the communication problem and improve teamwork may require a little more than one simple question.

That’s why, over 30 years ago, Turbo Leadership Systems along with Roosevelt University’s Department of Industrial Psychology developed the Cultural Benchmark Survey (CBS)™, which has been administered over the past many years to thousands of employees. To learn more about the CBS and how Turbo Leadership System’s approach could work for you and your team, click below: