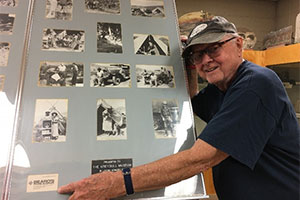 Tuesday, July 1, the 30th day of our West Bound 2020 Coast-to-Coast Adventure: My brother Bill got a head start on us as we were leaving the “Lazy Z” campsite in Greybull, WY. He pulled over in a couple of blocks to wait for us, and take Lucy, his dog, for a walk. He happened to walk by the little local library and free museum. Free is always a good price. There was plenty of space on the curb, so I pulled in behind. We all agreed to take a quick look through the Greybull Museum. It was amazing! We saw the skulls of dinosaurs and many other ancient artifacts.

The museum has a framed collection of photographs that chronicles the discovery of the preserved dinosaur tracks at Dinosaur Ridge. As we were looking at the pictures, I noticed the 30” x 46” frame was from Beard‘s Frame Shop in Seattle, WA. What a surprise! Just this past winter, I had breakfast with Terry Beard, founder of Beard’s Frame Shop, and a long-time client and friend. Terry and I hadn’t seen each other for decades. A mutual friend, David Wilkins helped us reconnect. David and Terry are members of Portland’s Rotary and Toast Master of the Month Club. We had a marvelous visit. Terry gave me a copy of his book, Squelched: Success in Business and Life by Finding Your Voice. 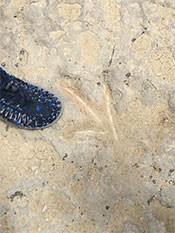 Terry and I became acquainted in 1997. Terry asked me to train the leadership teams of his 12 frame shops in greater Portland and Seattle. Our goal was to improve sales and profits. We created a tailored 6-week program for his team in customer service, sales, and leadership. His sales skyrocketed. There’s always more potential in your team. To get to the next level you must challenge, inspire, and equip them with improved leadership, communication, and customer relations skills. Just a few months later, he sold Beard’s Frame Shops and retired.

From the museum, we drove on to nearby Dinosaur Ridge to see, feel, and literally step in dinosaur tracks that are estimated to be 105 million years old. I get chills just thinking about it. 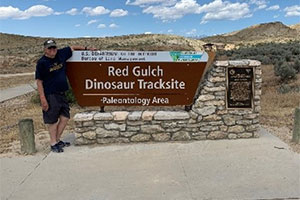 None of us are likely to make a mark that will last for 105 million years, yet we have an opportunity every day to make a bigger difference than we may know. Each time you touch another person’s life in a negative or positive way, you set off a vibration that may be felt for generations.

As Terry recounted memories of his team’s experience, he confessed, and I realized the deep mark Turbo Leadership Systems made on his personal life.

Set an intention now to make all your interactions today uplifting. You will make a permanent mark. 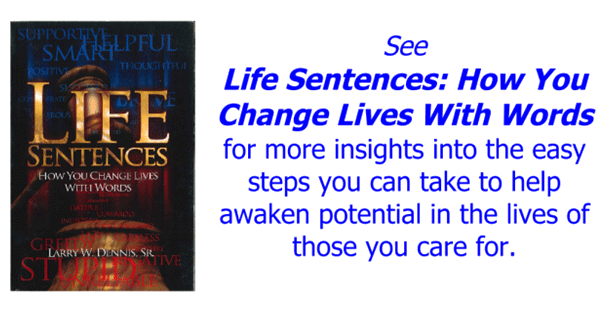