First in a series of Lewis & Clark Corps of Discovery 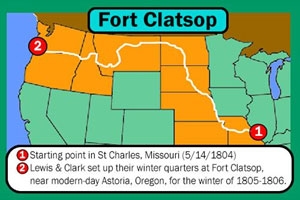 In February, 2018 we moved from Oregon to Georgia. In planning our first return trip to Oregon, I said, “Let’s see if we can follow the Lewis & Clark National Historic Trail on our return.” We started on the trail at its launching point St Charles, Missouri. The Corps of Discovery, as President Jefferson named them, left St Charles at 4:00 p.m. on May 14th, 1804.

The Journey of Discovery had begun many months before in President Jefferson’s mind. Thomas Jefferson, the author of the Declaration of Independence and second president of the United States, was a man of great vision. When Jefferson took office in 1801, most of the United States population lived along the Eastern seaboard within 50 miles of the Atlantic Ocean. Jefferson championed the United States purchase of the Louisiana Territory. 820,000 square miles from France in 1803 for $11,250,000 in cash and the cancellation of $3,750,000 in debts for a total of $15,000,000. This purchase included the land that now compromises 15 states and two Canadian provinces. This was the territory west of the Mississippi River to the Rocky Mountains. The Louisiana Purchase doubled the size of the 13 states that then comprised the United States.

Before the ink was dry on the purchase agreement President Jefferson sent a secret letter to Congress asking for the authorization and funds ($2,500) for the Corps of Discovery Expedition.

NOTE: Leaders are decisive and have the courage to ask for what they need plus the authority and resources required to move their vision to victory.

President Jefferson knew that the first of the competing nations (including Russia, Spain, and England) to find the legendary Northwest Passage would control the commerce and the destiny of the western part of the North American continent.

Jefferson chose Meriwether Lewis, who had been his personal Secretary, to head the exhibition. Jefferson said of Lewis, “It was impossible to find a character who to a complete science in botany, natural history, mineralogy & astronomy, joined the firmness of constitution & character, prudence, habits adapted to the woods & a familiarity with the Indian manners and character, requisite for this undertaking. All the latter qualifications Capt. Lewis has.”

NOTE: Your ability to choose the right person to lead the projects of your expanding enterprise
is key to your success as a leader.

Watch for the next installment of Lewis & Clark’s Corps of Discovery series.

Exciting news for
your organization
and your leaders
is coming soon!

"Everything is created twice: first in mind, then in kind."
Robin Sharma