The Best Response to a Bad Review

The Best Response to a Bad Review 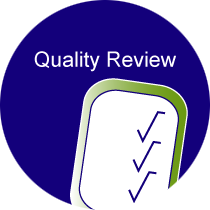 How would you react to a bad performance review?

“After four months of searching for a job, I was feeling a little desperate. Mind you, I was fresh out of college, had barely any experience, and was competing against hundreds of other people for the few jobs that were out there. Luckily, a friend of mine passed on my resume to his boss, who gave it to the president of the company.

“After two interviews, I had the job. I was the only Project Engineer and they really didn’t know what to do with me. I worked with all of the Project Managers, and each of them had a different ‘style’ – different forms for submittals and RFIs were used by almost everyone, different methods of organizing submittals and contracts, different naming conventions. The office was older, technology outdated, and even the people I worked with were a stark contrast to my previous employer – one guy wore painted toe nails and Birkenstocks every day (and still does)!

“I saw this as a stepping stone until I found what I really wanted.   So I came to work, did my job, went home.   The work was easy, it was getting done, and I had a job again.   I wasn’t close to anyone but I was doing my job.

“Six months into the job, I had my first performance review. Although I was new, I figured it would be a piece of cake – after all, I came to work and got my tasks done, right?   I ended up having a terrible review –I received good marks for ‘completing work timely’ and ‘understands her job’ – but in the areas of teamwork and enthusiasm, I bombed. I was allowed to read some of my co-workers anonymous reviews, and realized that my co-workers saw me as standoffish, unenergetic, and not an enthusiastic part of the team.

“That review, and those anonymous bits of feedback, changed my course. I realized how selfish I had been in my aspirations. I started showing up with a smile on my face, enthusiasm, asking how people were doing, asking more questions, showing genuine interest in the work, and what my colleagues had to say. I became confident, I started speaking up in our weekly meetings, and even suggested ways we could improve the company, streamline our work and organization. We created standard operating procedures and forms.

“A year later I had a great performance review. A year after that, the President of my company came into my office and thanked me. He said that my efforts and help in streamlining the company had saved us a lot of money.   I could have burst from pride.

“I learned that I can chose how I react to the feedback I read or hear. I chose to respond to the bad performance review by doing a 180, and have been pleased ever since.”