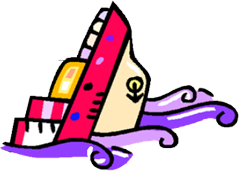 “In mid-summer of 1989, I was working in a small job shop in Sandy, Oregon. A friend and coworker raced a small hydroplane. As we were visiting on break one day, talking about our plans for the upcoming weekend, he asked me if I would like to go to a boat race as one of his crew members. I said, ‘You bet. Count me in.’

“The following Saturday, I was a little surprised when his brother, Richard, showed up all the way from California with his hydroplane just for the weekend’s races—we’d be racing his hydroplane that day. On the third lap of his time trial, he bumped into another boat and put a good sized hole in the hull of ‘our’ boat. It looked like it was all over. If he dropped out of the race he would lose the money all contenders receive for competing in the race. California is a long way to come for nothing.

“I had never raced before or been part of a boat race crew team. After I took a careful look at the whole situation, I took the chance of suggesting what could have seemed a lot like a dumb idea: patching the hole with duct tape.

“My friend and his brother quickly explained how much the boat was worth, to dramatize the risk involved and the loss if it sank. I said, ‘What are you going to do, just give up and go home?’ They decided to try my crazy idea and we did our best at duct-taping the hole. We not only ran the next day, we won the race and set a new water speed record on the lake for our class competition.

“The lesson I learned from this experience is that even if I don’t have a lot of background in a certain field, it doesn’t hurt to voice my opinion. I may be right, and my suggestion could save the day and help us win.

“The actions I call you to take are (1) Don’t wait until you are an expert to make suggestions, and (2) Encourage your new crew members—who have the advantage of ‘beginner minds’—to make suggestions. You will gain a competitive advantage, and you and your team will win the innovation race.”

Make no mistake about it; you and your team are in an innovation race. The future belongs to the organization that can out-innovate the competition.

What is innovation? It is the ability to look at a situation, method, or process that has been done a certain accepted way forever and then doing it differently—better. This kind of innovation will give you a competitive advantage—if only for one race—and then you may have to innovate for the next race.

The need for innovation has never been greater and the source of innovation is no longer just the captain of the boat. Every crew member must be asked for and expected to give innovative, breakthrough ideas.