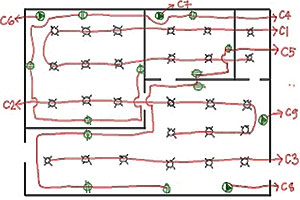 “In 2009, I was tasked as Foreman to do the electrical work on a new ground up Taco Bell in North Portland, just off of 82nd Ave. This was my first job in the lead position and I wanted to prove to myself, my boss and coworkers that I could do just as good a job, if not a better job, than my coworkers. I wanted this project to come out ‘Perfect.’ I wanted to complete it in this way to ‘Prove Myself.’

“I was handed a set of plans and basically told to have at it. I told my boss that this was one of my goals to be in the lead position. When I showed up to the site, I think the Super for the GC didn’t approve of a 21-year-old Foreman as his electrical sub. He didn’t treat me well at all. Once again, I was going to prove myself and I might have come across a little on the cocky side! Things were moving along, site work and rough in work behind us, I felt we were kicking butt. I would point things out on the plans that were out of whack or wouldn’t work to the Super, even things that didn’t pertain to the electrical scope. In my mind, I thought I was helping out, in his, I think he thought I was being arrogant.

“Finishes began to commence and I was feeling good about our progress and felt we were right on track as far as the schedule. We got ready to pull our feeder wiring into our panels inside the building from the building switchgear that was a pad mount service with underground feeder conduits, as this piece of switchgear sat several inches away from the building. I soon realized I had a major problem on my hands. One of my panels was missing one of the two feeder conduits that fed this panel from the switchgear. I had missed this on the one line schedule and I was in a panic. I can still feel the embarrassment and egg on my face feeling I had as I headed up the aluminum steps into the job trailer to meet the Superintendent and tell him about my mistake.

“I learned an important lesson from this experience. I learned to balance my determination to prove myself with the professional reserve and humility that builds the true respect and trust of others.

“The action I call you to take is to set high goals. Commit to excellence and balance your desire for outstanding achievement with an ounce or two of humility.

“It will save you a lot of face, you will build a winning team that trusts and respects you. You will beat the bid.”

Would you
rather be
right or
happy?