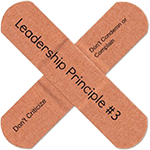 “In January 2013 I was asked to be the facilitator of a branch standardization committee. The previous lead had quit and one of our physicians had stepped up. Dr. X had a lot of enthusiasm toward the team and continued to co-lead it with me. She and I have very different leadership styles, which caused some difficulties, mixed signals, and misunderstandings with the team. There was a lot of criticizing, more accurately, condemning, going on quietly behind her back. After starting in Turbo’s Leadership Development Lab, I chose Dr. X as my ‘Pearl.’ I decided to make a point of not criticizing, condemning or complaining. If and when I heard others criticizing, condemning, or complaining, I did my best to coach them into more constructive behaviors. I even used Turbo’s ‘Time Out’ strategy that we had learned at Session 2 of the LDL.

When I heard someone gossiping in a criticizing way about Dr. X, I would say in effect:

‘I’m a little uncomfortable when I hear others talking about the Doctor this way behind her back.’ ‘Have you talked with Dr. X directly about this?’ Their responses were usually excuses or embarrassed silence.

“This morning was our final standardization steering committee meeting. After the committee meeting, the Doctor and I had a ‘debriefing’ session where we were able to discuss the difficulties we had, co-facilitating the process, and worked on ironing out some of the wrinkles. We agreed on how we could work together on the next phase of the project to make the process easier for both of us and move things along at a faster clip.

“The lesson I learned from this experience is not to give into the natural tendency we all have to criticize and condemn, especially as a team leader. The action I call you to take is don’t give in to the popular temptation to criticizing, condemning or complaining about others on your team. The benefit you will gain is a stronger, more productive team, and you will feel better about yourself.”

Jane’s story exemplifies Leadership Principle #3: Don’t Criticize, Condemn, or Complain. Condemn is defined as: considering somebody guilty – to judge that a person or thing is to blame for something; pronouncing something or someone as bad – to state that something or someone is in some way wrong or unacceptable.

Applying Leadership Principle #3 ensures that the team’s wounds will not fester, and instead heal quickly. 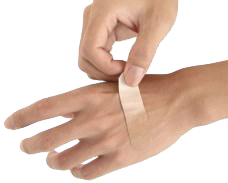