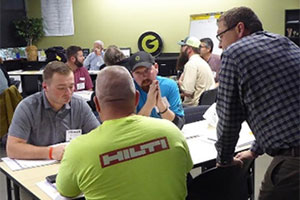 “I had been in a lead role for 25 years when I was assigned a project that would be a showcase for me and my crew. I’ve always taken the responsibility of running work as a huge obligation. This job was the first of its kind and a great opportunity to train the next generation of craftsmen. I decided that I would run this job differently – I would share leadership with the crew. Initially I had to get my crew to buy-in to my idea and own the decisions they would make.I set specific goals. Every week I produced a five-week look ahead and on Monday I put goals for the week on the white board adjacent to my desk. I encouraged my team to come in and see an up-to-date score on our pace and production as they determined what needed to be accomplished that day.

“At first it was arduous work for me. For the first couple of weeks, I had to talk myself out of intervening too often. I learned to trust that the crew would figure out issues, and that they had the skills to get the job done.

“Five months into the project I had to attend a meeting at our office. It was my first day away from the job site and my crew would be left on their own. I would be satisfied if they could do half of what I hoped for. While I was away at the office, I received a picture from the crew showing remarkable progress! They had not only done what I had hoped for, they surpassed my goal by another 750 square feet! 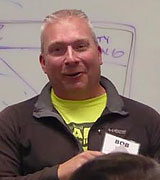 As I drove back to the job wondering what happened. They planned their work and worked their plan. My crew owned their responsibility and gave back to me more than I ever thought of asking. My decision to step back so my crew could step up empowered them for success.

“So, the next time we came to an installation day I had high expectations but was still cautious. What happened? They did another 75% gain and soon after that another 65% increase! I couldn’t believe what was happening. Given the right tools, clear expectations, a plan for execution with the buy-in of each crew member paid off exponentially.

“The lesson I learned is when I set clear expectations, break them down to daily performance measures, and post the score trusted teams will outperform my highest expectations.

“The action I call you to take is to break every project down to a rolling four week schedule with daily look forward performance targets. Keep your teams up-to-date score up for everyone to see. Tell your team you trust them to ‘beat the bid.’

“The benefit you will gain is the creation of a team that takes pride in their work and breaks performance records. They will make you proud.”

Break every project down to a rolling four-week schedule