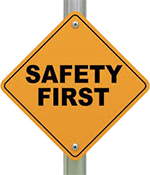 Dave, project manager for a northwest piping contractor, told session 8B of the Leadership Development Lab,

“One of the projects I’m currently managing is the HVAC portion of the Lower Columbia College gymnasium renovation. The work includes setting rooftop equipment, ductwork, controls, and balancing the system. One of the rooftop units sits four feet away from the edge of the roof, which is about a 30-foot drop-off with no handrail and no parapet wall.

“A few days ago, my controls subcontractor told me the general contractor had directed him to work on the Air Handling Unit with no fall protection. I told him I would find out what was going on.

“I approached the superintendent for the general contractor and said, “Brian, Johnson Controls is telling me that you’ve directed them to work on the Air Handling Unit with no fall protection. What is going on?”

“Brian told me that he directed him to work on the unit because the unit needed to get started in order to meet schedule. He stated that he did not say no fall protection but that fall protection was the subcontractor’s responsibility.

“I then said, ‘You know Brian, per our contract, fall protection is your responsibility. This is common with every other commercial project that I have ever run. This is because, one, the area is used by multiple subcontractors so it’s much more economical for the general contractor to include fall protection in their bid. And two, the general contractor has direct contact with the architect and engineers, who can provide the design for an appropriate handrail if required.’

“Brian said handrails on the roof were not in his budget. I told him that budget

constraints are never a reason not to be safe. I said the school district would find themselves needing a handrail up there at a later date in order to safely do preventative maintenance, and suggested that if he approached the architect and school district with the idea of installing it now, he could probably get a change order for the work.

“Brian agreed that was a great solution, so I asked, ‘Are you going to write an RFI and work on a handrail so we can complete our work?’ He said he would do it right away. I said, ‘Great! Thank you.’

“The lesson I learned is that I can never give in when it comes to safety. The action I call you to take when you see a safety hazard is to deal with it immediately.

“The benefit you’ll receive is the comfort of knowing you and all your workers will go home safely.”

First, Dave listened. He assured the subcontractor he would find out more, and followed through. When he had all the facts, he reminded the superintendent of the contract requirement and explained the reasons for it. He upheld the value of safety without compromise and suggested a way Brian could get the budget he needed. Finally, he secured commitment to take action. You can be sure Dave confirmed his reputation as a respected leader.