“Back in 1995 I was a young 19-year-old working on my first pipe crew project. We were laying 66” concrete pipe. I was very new to pipe work. By ‘new’ I mean all I knew was that pipe is round and goes in the ground. That was about the extent of my knowledge. I was working as a laborer in the trench with the pipe layer. He was having me hand grade the bottom of the trench where the next section of pipe was to be laid. The track hoe operator kept yelling at us to, ‘Hurry the @*#!! up.’ 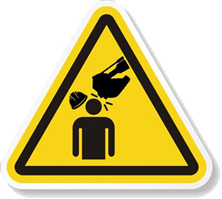 “I had my hard hat on hunched over working as fast as I could. I was grading the rock with my square nose shovel from the front of the ditch back towards the last stick of pipe we had laid, when bang!!! Something hit me in the head. It was the bucket of the track hoe. The operator decided to put the bucket in the ditch before I was done and just about knocked me out.

“I came flying out of the ditch and jumped up on the track of the machine. Some words were exchanged back and forth. I had enough talking, grabbed him by both shoulders, drug him out of the cab, and threw him on the ground. I proceeded to demonstrate with my fist what it felt like to get hit in the head with his backhoe bucket!

“BOY WAS I MAD standing in the  unemployment line the next day!

“The action I call you to take is to never be in the kind of hurry the back hoe operator was in that day. Never be so impatient that you run the risk of hurting or killing someone on your team. When you experience the unacceptable behavior of others, never resort to unacceptable behavior in correcting their behavior.

“The benefit you will gain by holding people accountable in an acceptable way is you will earn the respect of everyone in your life and world.”

I have enjoyed hearing almost 5,000 talks about the incidents in our LDL member lives that have made them mad. So many of the stories are almost unbelievable of broken trust, rude selfish behavior of bosses, spouses, siblings, and supposed friends. Travis’ story is so picturesque, so easy to see, and as a result to learn from. Any time we lose our temper or express anger unexpectedly we become less employable.

Lose your temper and you may lose your job