…and beat the bid

Brian, project manager for an aggregate and paving company in Bend, OR, told session three of the Leadership Development Lab… 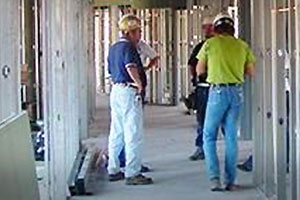 “In 1982 I had just moved to Juneau, Alaska to work for BCD Construction. My entire framing crew was new. We had been working together for just a few weeks and were starting to get the feel for each other. There was a little rhythm to our work, we were getting into the swing of things. It was a Thursday and we had all of the walls laid outfor the second floor. I challenged the crew by betting them that I could frame one of the units faster than they could do the other three rooms. If they won, I would buy all of them lunch. If they won, they would each take me to lunch. They took the challenge, agreed to the bet, and we were off and running.

“As the day went along and we took our noon break, they couldn’t believe that I was ahead of them. I had gotten the walls up, but had left out all of the reinforcement blocking. By the end of the day they finished their three units and found out that I had not completed mine. They won! I went to the office and told our boss that I had good news and bad news. The good news was that the second floor wascompletely framed! The bad news was I had to take the crew to lunch. He was very pleased to hear about what an extremely productive day we had and was more than happy to buy us all lunch the next day. 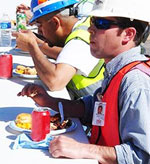 “The lesson I learned from this experience is throwing down a challenge is sometimes the best way to get people working together. Leadership Principle #10 urges us to ‘Stimulate competition’ and when done properly can be an effective way to earn a lot of respect.

“The action I call you to take is to challenge your team to achieve stretching results. Provide incentives and rewards for record setting performance.

“The benefit you will gain when you challenge your team is they will work together and exceed your highest expectations.”

This is a great story for many reasons. Don’t miss the fact that Brian took more than one risk. He put himself on the line and showed the crew that he was ready, willing, and able to work right along with them. He wasn’t asking them to make any more of a commitment than he was willing to make. He was willing to buy the crew lunch out of his pocket. I am willing to bet they had more fun that day because they beat the boss out of a lunch. Sounds like a genuine win, win, win to me.

Award winners this week at the Leadership Development Lab in Vancouver, Washington…