Ahead of the Game

Ahead of the Game 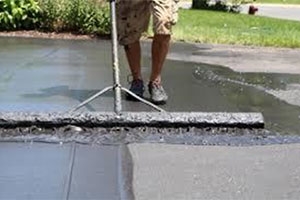 “We were seal coating a really long, extra wide driveway in Prineville. The huge house was perched on top of a hill that overlooks the valley down below. The main part of the driveway was steep with lots of switchbacks. Up until then we had been applying the sealcoat by hand with a ‘buggy’ that I drive to dump out material. Then the ground guys use big squeegees to spread the hot mix around. 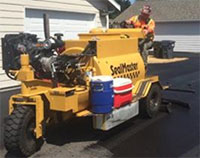 “We had just purchased a new machine that was all computerized and would automatically spray the sealant. All I had to do was carefully drive in a straight line. I had never used this system before and was very nervous about trying it on this multi-million dollar property’s driveway. One of my guys talked me into trying it. As a result we did a great job and probably knocked 3-4 hours off of the project.

“The lesson I have learned from this experience is to face my natural fears of new ways of doing things. When I embrace new, better ways of doing old, familiar jobs I can save time and improve performance.

“The action I call you to take is to trust the new technology your company has already purchased and will no doubt buy more of soon. That new technology is there to make your life easier.

“The benefit you will gain is not being stuck with the same old thing. If you don’t learn to keep up with technology, someone else will and you will get passed by. You will stay ahead of the game.”

You will either pioneer change, cooperate with change, or resist change. Most people resist change and then wonder why they are being passed over and left behind. They have this desperate feeling of irrelevance and not belonging. You must fight your fear of technology and all the other changes in your world. Embrace new computer aided advancements and you will be in a position to win the race.

When was the last time you said or heard someone declare their fear of burgeoning technology? Afraid they are being spied on? Afraid it won’t work? Afraid of robots in their many forms? This fear is nothing new. Go back and look at the fear people had of the “explosive” automobile engine- including Mrs Henry Ford. Clara Ford, wife of Henry, wouldn’t drive a gas powered car. She preferred to keep driving her 1914 Detroit Electric Model 47 Brougham. (Before World War I many women drove electric cars because they started instantly without hand cranking and had no difficult-to-shift transmission.) 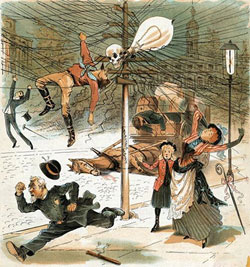 Only two decades earlier thousands of people said they would never put electricity in their homes. In 1889 the illustration appeared in Judge magazine capturing the widespread fear that no one (and no horse) was safe on the streets of New York.