Pleasing Everyone Means Pleasing No One 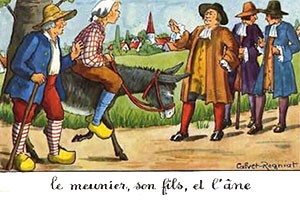 A Miller and his son were driving their donkey to a neighboring fair to sell him. They had not gone far when they met with a troop of women collected around a well, talking and laughing. “Look here,” cried one of them, “did you ever see such fellows, to be trudging along the road on foot when they might ride?” The old man, hearing this, quickly made his son mount the donkey and continued to walk along merrily by his side. Presently, they came up to a group of old men in earnest debate. “There,” said one of them, “it proves what I was saying. What respect is shown to old age these days? Do you see that idle lad riding while his father has to walk? Get down, you young scapegrace, and let the old man rest his weary limbs!” Upon this, the old man made his son dismount, and got up himself. In this manner, they had not proceeded far when they met a company of women and children. “Why you lazy, old fellow!” cried several tongues at once. “How can you ride upon the beast, while that poor, little lad there can hardly keep pace by the side of you?” The good natured Miller immediately took up his son behind him. They had now almost reached the town. “Pray, honest friend,” said a citizen, “is that donkey your own?” “Yes,” replied the old man. “Oh, one would not have thought so,” said the other, “by the way you load him. Why, you two fellows are better able to carry the poor beast than he you.” “Anything to please you,” said the old man, “we can but try.” So, alighting with his son, they tied the legs of the donkey together and with the help of a pole, endeavored to carry him on their shoulders over a bridge near the entrance to the town. This entertaining sight brought the people in crowds to laugh at it, until the donkey, not liking the noise, nor the strange handling that he was subjected to, broke the cords that bound him and tumbled off the pole and fell into the river. Upon this, the old man, vexed and ashamed, made the best of his way home again, convinced that by endeavoring to please everybody, he had pleased nobody and lost the donkey in the bargain.

Early in life I endeavored to teach our three sons what I consider to be a most important truth: emulating everyone else, doing what everyone else does is a guarantee of mediocrity. When I disciplined our sons for doing something they knew was wrong, asking, “why did you do that?’ and if you’re a parent, you’ve heard this answer: “because everyone else was.” I would tell them that’s no excuse for doing what you know is wrong. Endeavoring to please everyone, to fit in, conforming to the masses will never help you accomplish what is right for you. You can only do that when you follow Leadership Principle #1 Lead From High Ideals.

Effective communication and exceptional teamwork is how you beat the bid. For over 30 years, Turbo’s Leadership Development Lab (LDL) has helped thousands of owners, project managers, estimators, superintendents and key staff improve their communication, team building and leadership skills to beat the bid.

We are scheduling the Salem area Leadership Development Lab to start in early April and the Portland area will start at the end of April. Space is limited, so call 503-691-2867 or reply to this email and reserve a spot for you and your team today!