3 Steps to Conquering a Difficult Task

3 Steps to Conquering a Difficult Task

You can approach your project as a “pain in the butt” or dive in and develop new allies and customers for life.

“In January 2014, I was asked to help with a project in Ferndale, WA. The job was a $17 million Water Treatment Plant upgrade for the Public Utility District of Whatcom County. The Project Manager was assigned to a large, new contract and needed assistance in driving the Ferndale project to substantial completion – the deadline was just a few months away.

“Well, in February 2014, the Project Manager I was helping was suddenly let go. My company turned to me to complete the rest of the project. I had just gotten my teeth into the job, and accepted the responsibility of completing the project.

“As I started to dive into the project, I found that not only was it severely behind schedule, it also had poor quality control, poor documentation of changes and impacts, poor crew morale – and of course, was way over budget. I had a mess on my hands, and the Project Manager was no longer available. Additionally, about a month before I got involved in the job, the Superintendent was transferred to another project. The new Superintendent knew very little about the job.

“You can imagine the frustration of the owner – both the Project Manager and Superintendent were gone and in their place was me, a young Project Manager with little knowledge of the job.   I felt unwelcomed and untrusted.

“So, I started going up to the job on Sundays. I was on site early, and I worked late – 10pm, 11pm – whatever it took. I got the outstanding administrative items complete. I submitted requests for, and was awarded, time extensions due to some weather and owner delays so that we wouldn’t be in danger of getting liquidated damages.   I coordinated with vendors, pushed our guys to complete areas of work more efficiently, had BBQs to engage our guys who were far from home on a never ending job. For five months, I gave everything to this project.

“And on June 20, 2014, I received a “Substantial Completion Certification.” It is framed and sits in my office.

“So, we reached substantial, but we still had to gain final completion. After many letters, punch list work and negotiating—we finished the job. It was over budget, there were numerous warranty items to resolve throughout the entire warranty period, and we were on site much longer than bid. But we finished!

“I received a personal letter of recommendation from the owner. And I couldn’t have been more proud, because I truly felt I had earned it.

The actions I call you to take when you are given an impossible task is:

The benefit you will gain is your efforts will be recognized. You will be a “winner!” 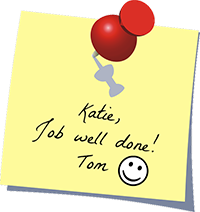